One family’s decision to send their child to school after testing positive for Covid-19 resulted in dozens of canceled Thanksgiving plans for other classmates, according to a California school district.

Parents of one elementary student knew their child tested positive for the virus but continued to send them to school for seven days, Dr. Brett Geithman, superintendent of Larkspur-Corte Madera School District in Marin County, told CNN.

The parents’ actions resulted in around 75 classmates being forced to quarantine starting November 19.

Geithman told CNN school officials were only made known of the positive case after Marin County Public Health contacted them, because it was never reported in the school’s database.

In May, an unvaccinated elementary school teacher in Marin County, who took off their mask to read during class ended up infecting several students – and they went on to infect other students, family members and community members.

The public health department has a process with all laboratories in the area so they are notified of new cases. They then follow up with the school to confirm the student has been undergoing quarantine, Dr. Matt Willis, Marin County’s public health officer, told CNN.

“In this case both the school and public health were given inaccurate information by the parents, which led to a prolonged interval of exposure.” Willis said.

“This is not only a violation of basic ethics, it’s a violation of law.” Willis told CNN. “Violation can lead to a fine or criminal prosecution as a misdemeanor. Because of the seriousness of this violation we’ve referred the case to the District Attorney.”

The district has published guidelines that instruct parents what steps to follow if a household member has tested Covid positive.

"If we didn't have strict Covid protocols, the aftermath of this could've been much worse," Superintendent Brett Geithman told CNN.

“We did not know this positive case existed.” Geithman shared in a written statement to CNN. “Upon calling the household, we learned that the student tested positive, did not inform the schools, and then sent the student and their sibling to school for seven days.”

Marin County Public Health shared a written statement to CNN stating, “These actions are a violation of both Marin County Student & Family Handbook on COVID-19 Safety and Marin County’s Isolation and Quarantine Public Health Order, which requires all individuals who have been diagnosed with COVID-19 to isolate themselves for at least 10 days.”

The department was first made aware of the positive case on November 8 from a healthcare provider. When they started the contact tracing process, the family failed to provide the name of the school the child attends on the first call, Geithman told CNN. 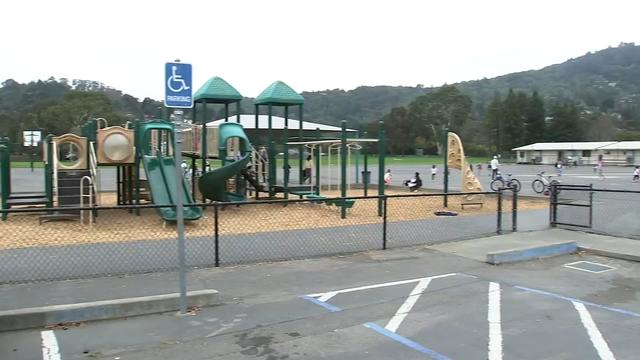 There were multiple attempts made asking the family to report the name of the school, but they did not return those calls, Geithman added. When the health department eventually figured out the school’s name, they notified school officials.

A child attends an online class at a learning hub inside the Crenshaw Family YMCA in Los Angeles, February 17.

They notified all that were exposed by sending out a text message to parents the night of the 18th, asking them to bring their child to get tested the following morning.

“The principal, nurse and I tested roughly 50 students and 10 staff the morning of the 19th in our gym.” Geithman told CNN.

From the testing, they were left with eight total cases. Two of those were the initial child and their sibling, while three were suspected school-based transmission, and the other three, household-based.

Those students and those exposed were immediately sent into modified quarantine, which lasts 10 days. “What this means is students could still attend school but can’t attend any extracurriculars,” Geithman told CNN,” including family gatherings or travel.” That quarantine period occurred before the Thanksgiving week, resulting in dozens of canceled plans

According to CNN affiliate KGO, several parents were shocked to hear what the parents had done. But at least one parent, Jilly Martay, told the station she was happy with how the superintendent handled the situation.

“We’ve been highly successful of having kids here every single day for over a year now and 99%+ of our families follow the rules and understand the rules,” Geithman told CNN. “This is an opportunity to look at this as a call to action and ask every single person to act with integrity. We all depend on one another.”

Instead of quarantine for Covid-exposed students, some schools are trying test-to-stay

Geithman said this was the district’s first classroom-based transmission.

“Their (the family) initial response was that they were uncertain of Covid protocols,” Geithman said. “The process the parent was instructed to do by Marin County Public Health was to quarantine.”

The school district told CNN they have taken action against the parents, but details of that punishment remain confidential.

“They’ve since issued apology letters to me, the principal, and the teachers involved and recognized their lack of judgement,” Geithman told CNN. He also noted all the children are recovered from Covid-19 and there was no serious illness among the group.

“This is a community that takes Covid protocols very seriously and acts on it. This is a one-off where a family made a terrible decision that impacted many students and comprised the health and safety of our schools,” Geithman said.

Students and staff are required to mask up inside the classroom, according to Geithman, who says, “If we didn’t have strict Covid protocols, the aftermath of this could’ve been much worse.”