3D Systems goes high-end with CubeX 3D printer Boasting some of the best specs in its class, the 3D Systems CubeX looks like the desktop 3D printer to beat. 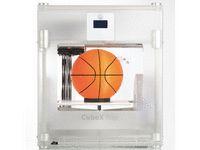 Along with the new midrange Cube, 3D Systems has also introduced a new, higher-end desktop 3D printer, the CubeX, with technical specs that puts it in direct competition with MakerBot's Replicator 2 and forthcoming dual-color Replicator 2X 3D printers.

Starting at $2,499, the CubeX boasts a 10.8x10.45x9.5-inch build area, dwarfing that of MakerBot's Replicator 2 (11.2x6x6.1 inches). And while you will soon be able to purchase a two-color capable Replicator 2X from MakerBot, 3D Systems will offer the CubeX in both two- and three-color options.

Read more: The best 3D printers in 2019 for beginners and budget creators 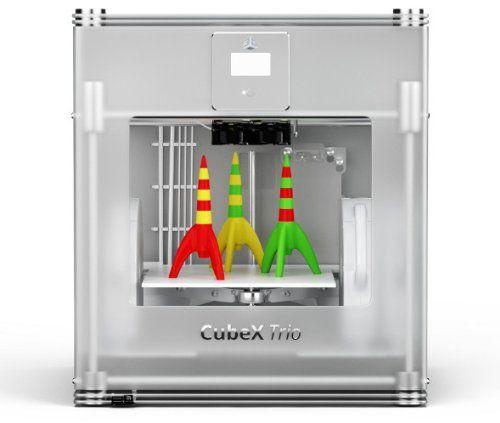 The price of the three-color CubeX tops out at $3,999, and the two-color model sells for $3,249. That might be high compared with the $2,799, two-color Replicator 2X (assuming the price stays the same as MakerBot announced previously), but potentially setting the CubeX apart is its ability to print objects made from both ABS and PLA plastic, the two most common desktop 3D printing materials. Most, if not all, other printers so far in this new category can only print with one kind of plastic at a time.

MakerBot does seem to have the edge on print resolution. Its new Replicator 2 printers can print to a layer height of just 100 microns. The CubeX can only go as fine as 125 microns. It also options for 250 and 500 micron layer heights, but unlike the MakerBot, those values are fixed, pointing to another potential edge for the Replicator 2 -- its software offers a much wider and deeper set of settings adjustments than that of the Cube family.

For that reason, the CubeX could have some difficulty attracting professional- and enthusiast-class users. Some of those customers might also be drawn to the CubeX for 3D Systems reputation for ease-of-use.

The CubeX might also pull people in for its upgradability. 3D Systems says it costs more than buying a multicolor printer outright, but if you decide you'd like to add a print head to either your single- or dual-color CubeX, the company will send you the necessary parts. The single-color model still has the same build area and finer printing resolution as the others, though, making it a competitive deal next to the single-color Replicator 2 given the CubeX's larger build volume.

The CubeX has the same cartridge-based plastic loading system as the more mainstream Cube printer, as well as the same touch-screen panel interface, as well as USB key-based printing. Unlike the Cube, the CubeX also allows for printing over a direct USB connection. 3D Systems also says it will support the CubeX with the same recycling program for plastic and plastic cartridges as it will with the Cube, offering mail-in service, as well as drop-off meet-up events in New York and San Francisco.

3D Systems will start taking orders for the CubeX immediately, and each unit includes three print cartridges (whether you buy a single-, dual-, or triple-color model), as well as 10 free 3D designs to print, and a free copy of 3D Systems Cubify Invent 3D design software.